In Behind The Scenes

Filming Assignment: Empowering Women Through Sports In The Middle East 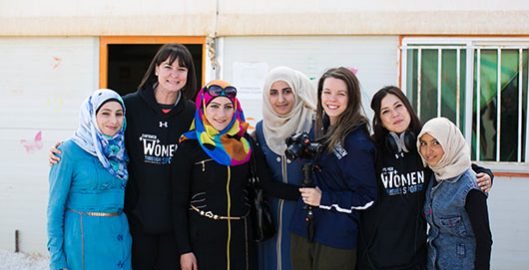 After 2 weeks of filming in the Middle East, I am home from one of the most fulfilling cultural exchanges of my life! We have just finished production for a short documentary series about elite athlete women in Jordan & Egypt who are empowering others and improving local communities through sports and education. We had the pleasure of filming with Syrian refugees at camps in Jordan, with local Egyptian girls playing basketball at NGO Girl Power, at a bike race that benefits local kids near the Dead Sea and so much more. With the added element of how topical the Syrian Refugee story is at the moment, I feel especially honored to be able to communicate the scope of the female perspective within this crisis. We were able to film at two different Syrian Refugee camps. One of which is in the middle of the Jordanian desert near the boarder of Syria called Za’atari. With just under 100,00 inhabitants it is the 3rd largest city in Jordan.

With the help of  the NRC (Norwegian Refugee Council), Badminton champion Dima Ardah, retired USA National Soccer Players (Mary Harvey and Lori Lindsey), Amy Poehler’s Smart Girls co-founder (Meredith Walker) & our project directors we were able to capture compelling truths and infectious joy. For all the stories within this initiative, I am pleased to say that our footage adds to the research and stats that reveal — women who are empowered correlate with healthier thriving communities. Our project directors and collaborators for this short doc film series are: UT’s Center For Sport, Peace and Society, ESPN Women & The US department of State. The Global Sports Mentoring Program was started as a large initiative that would empower women and girls worldwide through sports. I look forward to releasing more content from Egypt and Jordan. See the highlights video here & check back to see a behind the scenes video and 4 short documentaries about some of the women’s stories.